In Tamil Culture the parents are traditionally responsible to find a suitable marrige partner for their children. “Love warriages” exist as well, but are less accepted in society. Sri Lanka people, who migrate to Europe, often continue the tradition of the “arranged marriage”. That means, that young Tamils, who grew up in a western society, get confronted with contrasting ideals concerning marriage.

The ethnographic documentary “Arranged love” discusses, based in three portraits, different ways of young Sri Lankan couples to deal with that issue. The film shows different point of views, what conflicting situations can emerge and what opinions the couples hold on western ways of love amd marriage.

Born in 1981 in Switzerland. 2003-2010 she studied at the University of Zurich in Cultural Anthropology, Cinema Studies and Political Sciences. High up in the hills of Idaho, USA. Immigrants earn their wages in solitude as the quiet caretakers of thousand of serene sheep.

Griswold and Zubizarreta were born in 80´s in USA. They studied at the Notre Damme University of Utah. Artzainak is their first film. “A man is different from a woman. A man is allowed to do more things, a woman to do nothing.” say Oláh gypsies from Békés County Hungary. Traditions based on these kinds of suppositions keep this community firm. Grown Girl means: Mature Woman. Becoming Grown Girl is a turning point.”

‘Báriséj’ – is a gender documentary showing gender roles of an oláh gypsy community with its unique laws and traditions for women with their own interpretations.

Born in Budapest in 1967. She is a writer, documentary-film director, psychologist.

BEING A TRANS-PERSON LIVING IN A TWO-GENDER SOCIETY

Culturally, we are all governed to live in and reproduce two-gender societies, taking a gender role „naturaly“ assigned by biological sex. Some discoveries disagree.

Petar was born 1979 in Aleksinac, Yugoslavia. Graduated at the University of Belgrade, Faculty of Philosophy, Department of Ethnology and Anthropology on a topic History and perspectives of Visual Anthropology . His film education started in film school of Academy Film Center in Belgrade and further developed through various productions in the field of visual anthropology and observational filming. His video activist work begun in Brussels, where he is living and working since 2009.

On the basis of a social anthropological case study, this film documents the birth practices of the Bunong in Mondulkiri province, located in the northeast of Cambodia. Social, economic and political changes are transforming the province tremendously and are affecting villagers´ beliefs, perceptions and habits regarding pregnancy, delivery and early motherhood. Traditional midwives, pregnant women, mothers and their families give a personal insight into their present decision-making strategies, which are at the crossroads between tradition and modernity.

Tommi and Brigitte both studied Anthropology at the University of Zurich. Currently Brigitte is working in Mondulkiri in Cambodia to establish a Bunong Cultural Centre and Tommi is working on his PhD with the means of Ethnographic Film.

The movie was projected on various world film festivals (selection): This documentary film is an insight into the lives of eight Czech families or individuals living permanently in Sweden. What has this country given them or taken away? What are their views on leaving Czechoslovakia and living in the North after forty years? How do they and their children who were born here perceive Sweden and the Swedish society? The film does not only peek inside the Czech families but also reveals the atmosphere of Swedish towns and villages and tinges everything with original Czech and Swedish music.

Tomáš Kubák is a typographer, cameraman and director of travel films. He is cooperated with International Czech Club and make documents about Czech abroad.

CHOKORA - SURVIVING ON THE STREET Anthony and Robert – youngsters from Nairobi – give insight into their everyday life. With a film camera they document and comment the life on the streets and in the Halfway Centre. Thereby, not only their trials and tribulations are expressed but also their sense of humor and their plans for the future, which are full of hope: Moving images which convince through their authenticity. By handing over the camera to the two protagonist, a dynamic change of perspectives is   established. This renders possible a differentiated examination of the subject matter as well as the proceedings of the film.

Lea was born in 1984 in Switzerland, raised in Switzerland and three years in Brazil. MA in Social Anthroplogy, Film Studies and Social Pedagogy at he University of Zurich. The film Chokora was a part of her master thesis in social anthropology. Actually, she is working as a social education worker with children and young people in Zurich. Filip is a student at Mac Brod Gymnasium. He stays at the dormitory. Alija is a good friend of him at school. But they relate to different religions and that separate them not only during lunch-breaks at school, but all the time outside school. Filip spends his weekends in his home village Samokov, collecting mushrooms for sale and helping his grandparents and his mother in her small shop. Alija commutes everyday from his home village Plasnica.

The film hints on the situation in Macedonian countryside where unemployment forces people to leave the villages. This situation of dejection shadows the relationships between ethnic and religious groups.

As an anthropologist Storaas has worked with pastoralists and agro-pastoralists in Sudan, Kenya, Uganda and Ethiopia. General anthropology, i.e. adaptation, economy and politics, has been his main concern.

As a filmmaker he has been involved in projects in Africa and the Middle East, in Greece and Macedonia, in Mexico and USA, in China and in Norway. A theme conveyed in some of these projects has been magic, how magical beliefs may influence everyday life.

Koneska is a senior curator at the National Museum of Macedonia in Skopje, ethnology department. Her main topics of research and scientific relates to: traditional food; coppersmith and tinsmith crafts; Slavic Orthodox community in Istanbul; Shared Shrines; Turkish and other Muslims ethnic and religious community’s.

Koneska has directed 12 films based on research in Macedonia and Turkey. The compatriotic village of Holuboje was founded in the so called Bessarabia (part of today’s Moldavia) by Czech colonists in 1864. Holuboj compatriots managed to preserve aspects of their language and folk culture, often long forgotten in the Czech Republic, in the manifold national variety of this region. The most extraordinary of all is the folk band which has continuously functioned here for incredible 146 years and which has various Czech songs in its repertoire.

Despite these folk singularities, local people are afflicted with the same problems as all the people of the isolated and poor Moldavia. The decline in economics, disintegration of agricultural co-operatives and everyday existential problems endanger the existence of this folk band. The author of the film introduces four protagonists, inhabitants of Holuboj, who provide an insight into the past and present lives of compatriots in Moldavia.

Martin is a student of Social Anthropology at the University of Pardubice. He is interests in the field in Moldova. 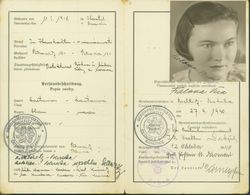 Věra Fialová was born at the end of the First World War as the out-of-wedlock child of a Czech woman and a Polish man, a Russian prisoner of war. In an old suitcase she keeps her old letters and pictures from the First and Second World Wars. Her memoirs, accompanied by songs from her family repertoire, capture the "small history" - the life story of an "ordinary woman" against the backgraound of the great historical events of the 20th century.

An edited document taken as part of ethnological field research in 2007 and 2009. The Film was produced as part of the research project of the Institute of Ethnology of the Academy of Sciences of the Czech Republic, v.v.i. Prague "Cultural Identity and Cultural Regionalism in the Process of Shaping European Ethnic Patterns" (reg. number AV0Z90580513).

The director Jiřina Kosíková (*1952) works as ethnologist at the Institute of Ethnology at the Academy of Science of the Czech Republic, v.v.i. Prague - Department Brno. Specialisation: Visual Anthropology. Use of video recording as an ethnological field research method and technique.

Production:Institute of Ethnology at the Academy of Science of the Czech Republic, Veveří 97, 602 00 Brno In India, Uttar Pradesh, a woman fights against injustice and male's violence. The woman is Sampat Pal, that founded the Pink gang. Thousands of women now fight together. Pink dressed with a pink stick.

Enrico was born in 1975. He graduated at Turin University in Italy of Literatury and Philosophy. He is an editor and freelance director since 2000. In the far, far North, where the day begins and the oceans meet, a small hamlet New Chaplino is situated. The goverment decided to turn the village into a tourist resort. It is winter, 30 degrees Celsius below zero. The tourists are not coming. There are only few memories of them and the snow has already covered their footprints. The village people live in the cardoard houses. They are waiting for the tourists and dancing. It is only Vika, their country fellow, who is coming to visit her native village after she has spent few years in the city. Thus all villagers keep waiting for the tourists and dancing...

The Director Jaroslava Bagdasarova was born in Martin, Slovakia. She graduated in social anthropology at St.Peterburg State University, Russia and in documentary cinema at FAMU, Prague, Czech republic. She is currently working at the research institute in Halle/Saale, Germany. Language of dialogues: No dialogues