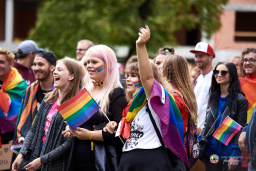 The documentary Shame and Perversity documents the first edition of the LGBT+ Pilsen Pride Festival, which took place in Pilsen 2017. The central theme of the film is "coming out", not only in connection with LGBT + people. What happens when the world of people who take to the streets to spread love and show non-normativity (not only) to the people in Pilsen meets the world of those who went out into the streets with hateful banners and shouts?

Andrea Luková studied social and cultural anthropology at the University of  West Bohemia in Pilsen. She is currently studying the Masters Program of Anthropology of Past Populations at the Department of Anthropology in Pilsen. His scientific interest is mainly focused on issues concerning the evolution of the carpal area from the African Apes to the Anatomically modern humans, but she has not completely dissociated from the social issues of today's society. The Pilsen Pride project, whose first year is the main theme of the documentary Shame and Perversity, continues to take place this year for the third time.