MARQUIS DE WAVRIN, FROM THE MANOR TO THE JUNGLE 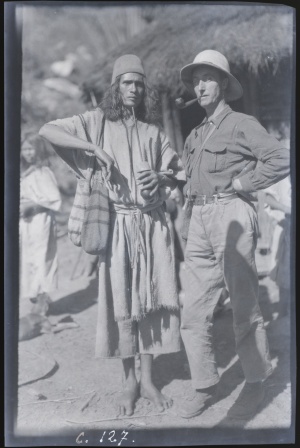 The film invites us to follow the strange path taken by the Marquis de Wavrin, the first white man to film, at the end of the 1920s, the "head shrinking" Shuar Indians. Over 6000 meters of footage filmed between 1920 and 1938 led to his becoming a renowned explorer and ethnographer. Thanks to the safeguarding of this film heritage by the Cinémathèque (the Royal Belgian Film Archive), we are able to learn about the Marquis de Wavrin, defender and friend of the Indians of the Upper - Amazon, and a true filmmaker at heart.

After studying Art History and Social Anthropology at ULB, Grace Winter continued her studies at the Sorbonne for one year, obtaining a mandate from the CNRS (French National Center for Scientific Research) to produce ethnological works in Mali and the Ivory Coast. In 1979, she joined the distribution company Progrès Films, and went on to become a director of the company for 18 years. In 2002, following the closure of Progrès Films, she returned to the Cinémathèque (the Royal Belgian Film Archive) as a researcher
Luc Plantier studied Language Sciences at the University of Avignon, then went on to complete a Masters in Cinema in Lyon. Moving on from theory to practice, he obtained a post-graduate qualification in editing from IAD (The Broadcasting Arts Institution) in Louvain-La-Neuve.