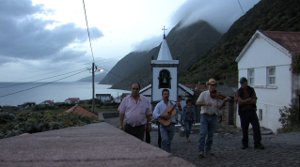 This documentary intends to participate in the understanding of  the life of people who were emigrated and returned and others who have just arrived.