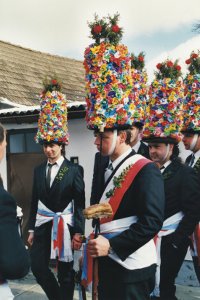 The documentary film is a part of a multimedia study which consists of visual and editorial parts. Apart from the film, the DVD offers thematically digested shots recorded in scope of the research and a photogallery. Visual as well as editorial part connects possibilities of verbal and visual language and is bound to serve as an interception of the complexity of the observed march and to the representation of the dance as a cultural context. The complexity should help to reveal and deliver the connotation of the traditional event in today´s local society. The documentary can be publicised separately as well and its informational value does not depend on the supporting text of the multimedia study.

Daneila Stavělová operates as a research worker at an Ethnological Institute AV ČR, V.V.I.. Her main field is ethnochoreography and anthropology of dance. In the scope of the specialisation she lectures at the department of dance at HAMU, Prague, where she organises workshops as well. She cooperates as a choreograph at designing of thematical scenical projects which deal with traditional dance and music culture. This year, Daniela Stavělová was confered an Award of Ministry of Culture for outstanding contribution in the field of folklore and for interconnecting the scientific, artisitc and pedagogical activities.

The project was executed in the scope of the research AVOZ 90580513 of the Ethnological Institute AV ČR, v.v.i. and subsidized by Ministry of Culture CR within the programme Traditional folklor culture.